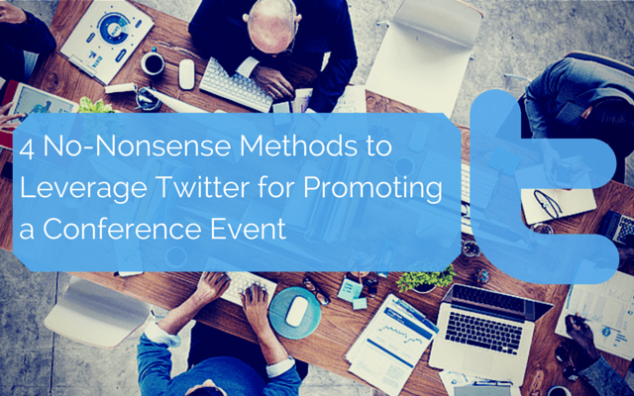 It’s common sense nowadays to leverage social media when promoting a conference. Twitter, like all other social networks, is just a tool, and its effectiveness is almost entirely dependent on how well you use its resources. It does require strategy; you can’t just send out a few tweets here and there and expect a Kim Kardashian-like following.

If you want to learn how to use Twitter to promote an event, then there’s a smart way and boneheaded way of going about it. If you want to be intelligent and sniper-like in your approach, then use the following tricks-of-the-trade.

1. Come up With a Hashtag

Yes, there is a strategy even for the seemingly simple task of coming up with a hashtag. The hashtag is relevant because it lets you monitor what others are tweeting about your upcoming conference; it also allows your followers to follow the latest conversations about your event.

Don’t bombard each tweet with multiple hashtags. Using too many makes the tweet look cluttered and is just unpleasant on the eyes. As a rule of thumb, use no more than three (but preferably two) per post.

The tweets that standout within a newsfeed are the ones with an image. An image may include the venue for your conference, last year’s event, or the profile pic of a guest speaker. Not every tweet, however, should have an image. There is such a thing as an overkill, so don’t get too image-happy with your tweets or else you risk annoying your followers.

Alternatively, you can also use a site like Vine to create brief 6 second looping videos. If you have footage from last year’s event, then see if you can find significant moments that can be used to create a GIF to promote this year’s conference.

An effective way to promote your event on Twitter is to repeat your tweets. Even if you have followers ranging in the hundreds or even thousands, not all of them are going to read every single one of your messages. This is why it’s useful to repeat yourself. By “repeat,” this does not mean sending a previous tweet verbatim. That will annoy those who do keep up with all your tweets. You can reiterate the same message without making it seem like you’re repeating yourself.

Here’s an example of how to do this:

Tweet 1: Be sure to check out our mobile marketing conference this Sunday at Staples Center.

All three tweets inform followers of an upcoming mobile conference with specific information that includes the date and location. Yet, all three tweets are conveyed in a different manner. The first tweet is the original, while the second is a reminder. The third merely points out a food-for-thought fact that mentions the event in passing.

Even those who missed the first tweet will get the message through the second or third. Those who do receive all three tweets won’t feel like they were bombarded with repeated information.

There are mixed feelings about promoting events on Twitter through sponsored tweets. This is basically Twitter’s version of Pay-per-Click; the ads appear as a normal tweet but with a message at the bottom informing readers that the tweet is a sponsored one. Like other paid ads, sponsored tweets can produce a mixed bag of results.

Consider some of the pros and cons:

Most experts recommend using sponsored tweets only if your company already has a sizable reputation. Otherwise, the tweets will most likely get overlooked.

Twitter can be an invaluable tool but there is a right and wrong way to use it. If you want to know how to promote event on Twitter and get the best results, then be tactical in your approach. The words you put into a 140 character post can only work their magic if certain tweeting “etiquettes” are followed.