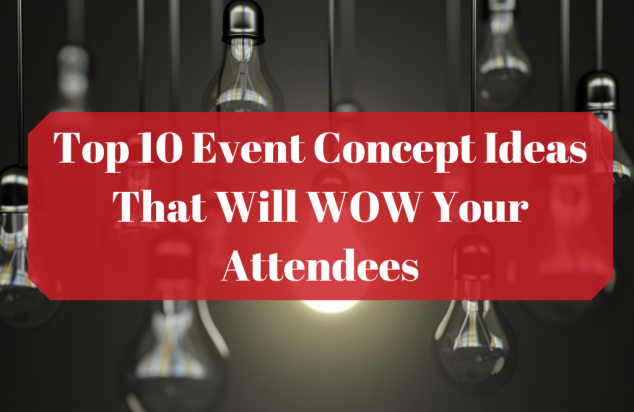 Top 10 Event Concept Ideas That Will WOW Your Attendees

We have been planning events for a LONG time. As veterans of the industry, we can say with certainty that people who attend events are looking for a memorable experience.

It doesn’t matter if it’s a corporate event or private party; people want to experience something novel and worthy of being talked about for days to come.

Whatever your event concept ideas are, they need to be fresh and not have been done 10 times over by other events. Here are a few ideas we have incorporated ourselves and have been modelled by other event planners with great success.

Silent conferences are a growing fad and one of those concepts for events we highly recommend while it’s trending. So, what is a silent conference? Essentially, it’s an event where guests don wireless headphones and tune into a specific lecture.

The silent conference concept is a huge time saver for event planners because it means multiple speakers can speak at once, while guests tune into the presentation they’re interested in. This is also beneficial when the venue lacks multiple rooms.

Multiple speakers can share the same room without their respective listeners being disturbed by the other lectures taking place.

Watch this video of a silent conference in action. This was a conference on sustainability that took place in Stockholm, and had roughly 700 people in attendance.

Silent conferences have also been used for the entertainment aspect of an event. People on the dance floor can choose which music they wish to dance to.

An unconference is another term many of our clients have never heard of. It’s a relatively new concept and one that’s gaining a lot of traction. Unlike a traditional conference, unconferences are loosely structured and often don’t even have a speaker. At most, it has a designated facilitator.

Here’s how it usually works: there are no assigned topics to be discussed. The topics are left to the guests that write down what they would like to talk about on a chalkboard. Based on what is written, guests are broken into groups where the chosen topics become the focus subject.

Essentially, an unconference is one big open discussion forum rather than a structured conference with a speaker.

The Diabetes UnConference is an example of such an event. As suggested in its name, this is a diabetes awareness seminar. It goes by the model that every attendee is an expert and has something to share. Everyone is invited to ask and answer questions in a safe and non-judgmental setting.

Throughout history, there were countless high-profile, but secret events that were shrouded in mystery with admission only granted to a select few. The Freemasons or the Illuminati are some prime examples.

To give your event an aura of secrecy, don’t reveal the location until several hours before.

The Cinema Royal, A Czech-based theatre group, is one company that routinely capitalizes on such event concept ideas to perfection. Its live plays are usually held in secret locations, often consisting of abandoned venues. Guests are given very little information other than when and where to show up and how to dress.

Collaboration is nothing new. We have hosted countless events where two or more companies come together for a common collective. Collaboration, though, can entail far more than just putting two heads together and sharing resources.

Brooklyn Skillshare, a New York-based education organisation, took the idea of collaboration to the next level. The non-profit group routinely holds events that incorporate elements of a block party and the conference model of EdCamps.

The event consists of a large, community-based get-together where members freely share their knowledge with attendees. Admission is free to everyone, and members are discouraged from making any sales pitches.

The event is one big collaborative movement among attendees who create their own event agenda at the event. In this respects, it also has some hints of an unconference.

One of the event concept ideas we always liked is the concept of inclusivity. Of course, there’s nothing wrong with restricting admission to a pre-defined audience. However, some events can be totally inclusive without regard to demographic.

One of the models of this idea comes from Burning Man. The Burning Man is somewhat of an unusual non-profit company based in San Francisco. It holds annual gatherings in an area of the city it has designated as Black Rock City.

Everyone is invited and for free. The event is a large festival where people get together to work and display various artwork. There may also be live performances and acts. Regardless, all projects and performances are considered gifts given by individuals or groups to everyone to enrich the overall experience of the collective.

Project-based events are a norm in the tech industry. So how does this work and how can you adopt this type of event model? Project-based conferences are more or less weekend-long events. In the IT sector, these conferences include one big get-together consisting of designers, developers, and marketers.

They all come together to share ideas, come up with innovation, and even build concept and prototype models. Sometimes, the ideas even lead to an all-new startup company. For attendees, this means the possibility of new business relationships and ventures.

Startup Weekends is an org that holds project-based events all over the world. Their 54-hour long conferences are designed for the purpose just described. You can follow suit by hosting events over the weekend that invite an audience to attend and come up with new advancements in your industry.

Speed dating is one of those event concept ideas that have been around even before the days of social media. It’s a fun way for people to walk away with a dozen phone numbers, a few of which will hopefully lead to a date.

The same concept can be applied in a business sense. We have planned events where attendees meet up with other like-minded people where business cards can be exchanged. We get excellent feedback from these type of events, with guests indicating that the networking has led to more clients or job opportunities.

Keep in mind that speed networking can also be a remote event. This can connect people from all over the globe. More jobs these days are also being done remotely.

EYP is one such group based in London that routinely hosts meetup events for young professionals.

Have you ever seen the 1999 movie Fight Club starring Brad Pitt? The film was about a secret underground organisation where white-collar workers went during their lunch break to vent their frustrations through bare knuckle fighting.

Lunch clubbing is similar, except members attend to dance rather than punch each other in the face. Basically, in place of having lunch at the office breakroom or at the drive-thru, people attend a short dance/network event. Attendees pay a small fee, which also includes drinks and a small lunch.

The concept was started in Sweden by an organisation known as Lunch Beat. The company has a set of established rules for participants, similar to the rules of engagement in the Fight Club meeting. Lunch clubbing is especially a good idea if your event caters solely to a local demographic.

This is one of those concepts for events that caters to young and hopeful entrepreneurs looking to get their idea out there and attract interested investors and partners.

In a formal light-speed presentation, also known as a Pecha Kucha presentation, each presenter is allowed to show up to 20 images, with 20-seconds of speaking time for each image. Once all images are shown, their time is up, and they must clear the stage for the next presenter.

Here is an example of a light-speed presentation event hosted by the Edmonton-based consulting group Management Consultant.

Knowledge cafes also make good team building exercises. It allows you to gauge how well people are able to work together in a small group and come up with ideas when they combine their minds.

So, did you find any of these concepts for events useful? We know some of them can feel a bit out-of-the-box, but these are ideas we have used with great feedback.

Many of the conference venues in London provide just the right setting needed for hosting unconventional events. All it takes is a little imagination to transform a facility into a setting perfect for your event and its concept. We have done this thousands of times and can do it for your next conference.

Our ideas only represent a small fraction of the possible concepts. Do you have some of your own event experiences you would like to share? Please contribute by tweeting to @venueseeker.